On your turn you receive "income" from your lands and acolytes. Each land can house one arcania (a building), and each arcania can house one to three acolytes. Each of the six acolytes (Mineral Summoner, Paladin, Sapsinger, Wizard, Mage and Hydromancer) provide different resources (Crystals, Honor, Biological material, Wisdom, Magic and Water) that expand your acquisition options. Your resources are stored on an abacus using wooden drop-shaped tokens.
With the expansion, Adventuring Acolytes, you are able to send your acolytes from their arcania out into the word to explore. Adventuring acolytes can make discoveries in your own lands and the lands of the other players (such as seahorses and sacred trees). In base game, Numinous Nonflict, you attain ten lilies to win (which can be found in high arcania and advanced technologies), but with Adventuring Acolytes you now each have unique ulterior motives (dealt from an ulterior motive deck) that the other players are unaware of. To make this game even more fun, all players complete at least one ulterior motive before the game is done – everyone gets to win. 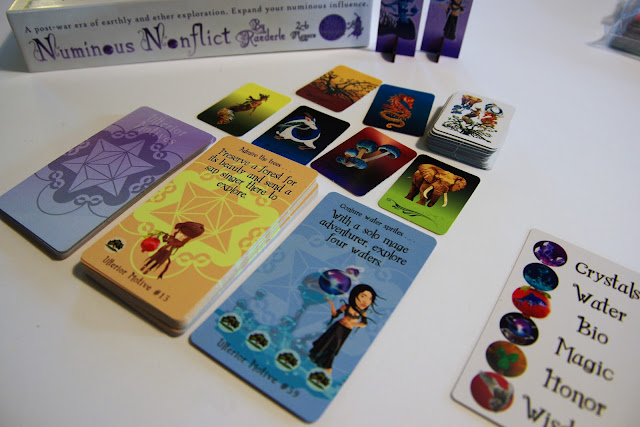 Numinous Nonflict takes place in a post-war era. Individuals no longer struggle with self-worth, self-image and self-concept and thereby are no longer competitive IN nature. Individuals no longer struggle to comprehend the abundant, endless nature of the universe and its resources, and thereby no longer feel the need to fight or go to war over resources or an inward sense of lacking.
In this world devoid of competition with each other, there is still a desire to achieve great works for the sheer joy of it. Individuals practice absolute focus, mastery of every part of their body, precision, emotional clarity, strength of compassion, intuitive guidance, and tests of logic. After mastering these subjects in their first forty to eighty years of life, individuals move on to more advanced lessons: telepathy, levitation, full grokking of other beings, enmeshment with animals and plants, energetic biological influence, direct manifestation (without the waiting period), clairvoyance, multi-dimensional sight, out-of-body travel, hibernation, and breatharianism.
The acolytes in the game represent six areas of study that are of great interest in this era. Three areas from the study of earth and three areas from ether. For full setting description, download the manual from The Game Crafter sales page for Numinous Nonflict.

Heir to the Phoenix Crown

Heir to the Phoenix Crown is a game a strategy, intrigue and magic.
You obtain your Phoenix Crown (and win the game) by obtaining the most royalty credibility (points). The most royal credibility is found in your castle and its grounds. However, luminaries drawn to your cause also yield royal credibility with the swayable masses.
Thematically, each day you will utilize the wealth, partisans and holdings currently in your vicinity to bring you closer to your rightful crown. Or, plainly, each turn you'll use the cards in your hand, discard them, and draw new cards from your deck to use on your next turn.
To acquire retinue and holdings that provide royalty creditability, you'll need to first work on collecting an effective following which works toward your cause. Your retinue and wealth provide six types of assets, and you'll need plenty of each type in order to purchase valuable lands and win the hearts of important personages.
Click here to see cards from the game, and more.

Moral Quandaries & Great Conversations
Have you ever played a game that simulated laughter, serious discussion and meaningful understanding of your friends? If not, perhaps it is time to get your hands on A Voice of Conscience. Designed to make talking with friends hilarious and meaningful, and it works! We've been playtesting around the country, sometimes laughing so hard we cried.
A Voice of Conscience is...
A Voice of Conscience tests your knowledge of yourself and of your friends. There are no right and wrong answers, only the truth of you and the other players.
What would you do...
These are just a few examples of the kinds of ethical quandaries raised in A Voice of Conscience. Each unique deck has 90 different questions, covering a broad spectrum of ethical questions, covering everything from theft to white lies, from abortion to incest.
Tired of talking about movies and the weather? Want to really get to know your friends and have meaningful discussions that matter to you? Then this is the game for you!
This is also a great game for getting into meaningful discussions with your children. Have you ever talked to your children about sex, drugs, violence, love, marriage, fertility, politics, and health? If you have, that's great! This game will help you find even more great topics to discuss. If not, then all the more reason to get this game, so that you WILL have those meaningful discussions.
The Crystal Deck features questions that are great for people new to moral quandaries. If you've never played a game like this before, this is a great deck to start with. You can think of this deck almost like a modern-day version of "A Question of Scruples."
However, unlike A Question of Scruples, there are more than four different play-styles, allowing you to use your deck in unlimited ways, keeping the game fun and fresh for years to come. And if you ever do get bored with the 90 questions in the Sapphire Deck, then you'll be ready to get another deck.
The other decks plunge into newer territory, into questions and subjects that most people in first world countries will have not considered. Although, The Emerald Deck, which contains many questions pertaining to business ethics, contains questions that will have occurred to many employers. 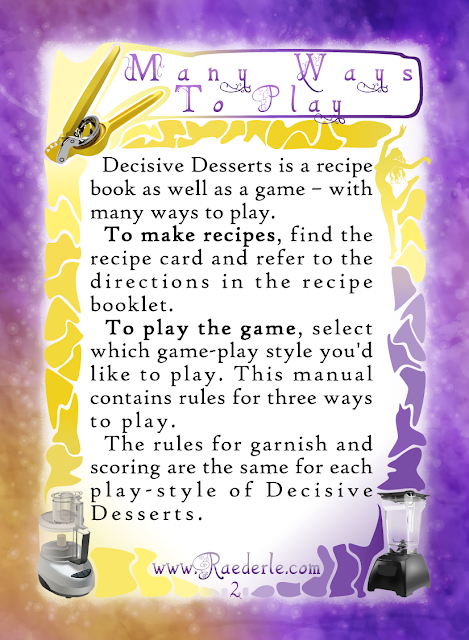 Raederle's Rankings of 100+ Games — A brief description and rating for all the games I've ever played. Also shows how many times I've played the game and whether or not I own the game.
Uprising: A Kingdom Torn Asunder — A detailed game review of this "indie game" from The Game Crafter.