At twenty-two (in 2011) I learned about the magical properties of building with cob – a mixture of clay, sand, and straw. Cob allows for better passive heating while being insect-proof and fire-proof. It’s better for insulating against inclement weather, sound, and unwanted electromagnetic waves. It is fully-moldable, allowing for creative, curved structures. Shelves can be inset directly into cob walls, and heated cob couches can be a natural offshoot of having a wood stove (or rocket stove) flu running through the cob couch.
My dreams of cob construction readily added onto my dreams of a community which had been born when I was sixteen. But my vision of a raw foodist* community living in a giant cob home began to fall apart in my late twenties as I pieced together the real, major challenges in founding a community. The dream seemed to fade into a pale background idea as I moved into an eco village to be with my new love (Greg) at the age of twenty-six. (*Today if I founded a community it would not be a raw foodist community, although conscious eating would be a major aspect.)
Yet my visions of a dream house have not died. In fact, they’ve been expanding and morphing through every phase of my life. As a young child I drew floorplans of giant houses with rooms for all my friends. In my twenties I explored different communities and homes with an eye to the architecture, memorizing the features that interested me.
In 2019 I began thinking that perhaps I would build my dream house here in the community I’m currently living in. I figured Greg would keep his home and I would build a new one for Lytenian and I. Of course, I didn’t (and still don’t) have the capital required to make this happen, but I decided to work on designing it anyway.
I didn’t start the actual design until 2020 and I didn’t finish it until February 2021 when it became clear that I would never build it. This community has more applicants than available lots, so there is no reason to assume that I’ll be able to raise the money required to build and move forward with this particular design. Furthermore, the limitations of the lot sizes available here actually limit the plan in many ways. However, limits are great for making good designs.
Because of the limitations of building on a lot here, I was able to shift my ideas around within a particular set of confines. That helped me refine my ideas in many important ways. When one has infinite space to work with (and an imaginary, infinite budget), one can just “make it bigger” if one is struggling to make everything fit. Working with tight constraints forces one to prioritize and carefully arrange.
Here is the design I came up with for the limited size and square footage allotment available here. I hope you find these drawings interesting and that they inspire your own ideas. 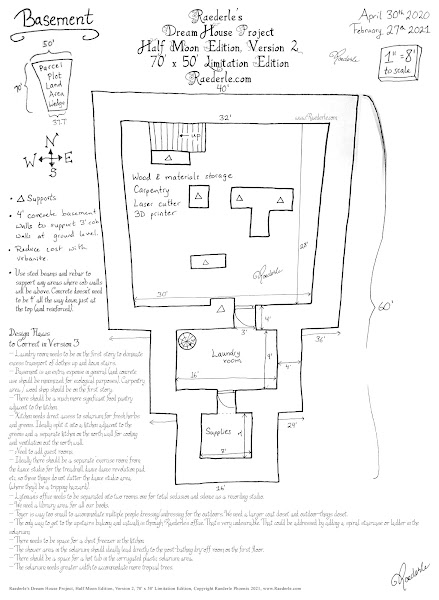 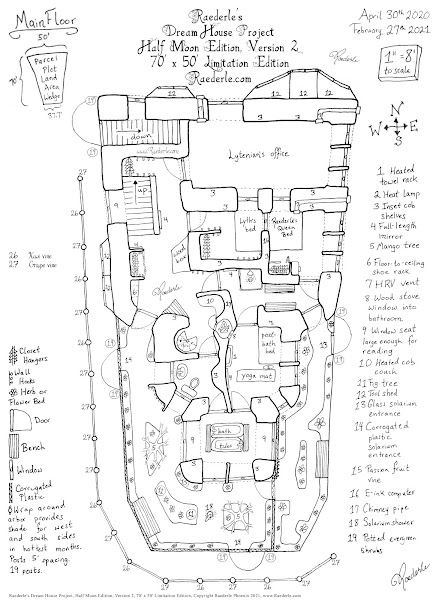 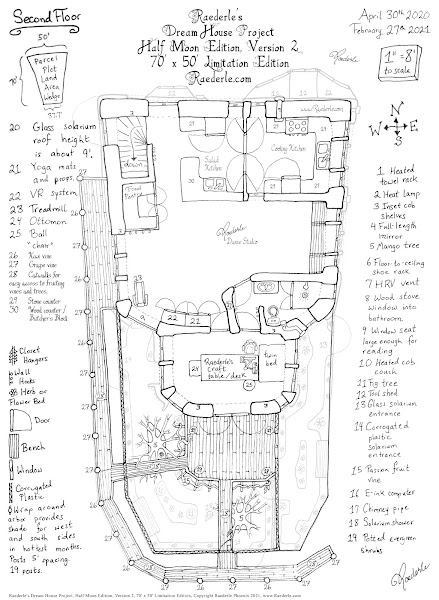 While it is important that my home serve as, well – a home – my designs have many other purposes as well, such as serving as a model eco home, showing all the innovative things we can do when we combine ancient and modern technologies together in synergistic ways. When I have the funds to build it, I will film the entire process for my youtube channel so that these ideas can be showcases and spread.
Another important feature of my designs is for my home to serve as a place to host educational, restorative workshops and retreats. My background in nutrition, health, yoga, meditation, and trauma recovery all lead toward hosting such events, which I have almost always done in very limited spaces. To have my own dedicated space for this would make it possible for such events to be happening every month.

Below I’ve included Version 1 of my Half Moon concept. In this older design I had the solarium only going up one story, but the arbor coming up two stories. 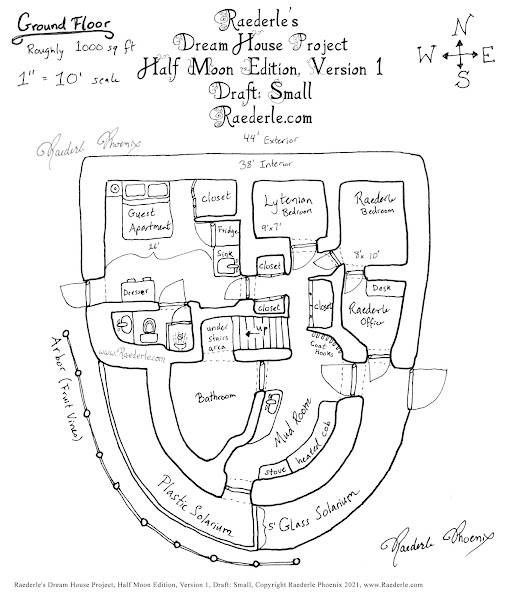 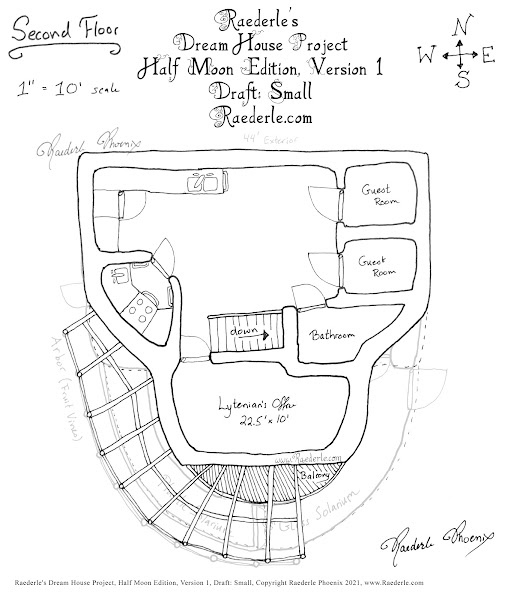 Problems with Version 1:
You may share these images if you wish, but be sure to include a link back to this page. Thank you. — Raederle Phoenix

The third design in this series is drawn and inked, but yet to be uploaded here.