How to Remove Chemical Odors from Clothing (HSPs need to read this!)

I'm genetically a HSP (highly sensitive person). I'm also on the autism spectrum. To add to this mix, I was exposed to many harsh chemicals in the aftermath of a house-fire in my teens, and during this time period I was so depressed that I further damaged my body with excess aspirin usage, smoking pot, and drinking alcohol. Besides all this, I ate a fairly standard American diet (SAD), and I was putting on weight besides developing a stomach ulcer (or several). At seventeen I began to turn the mess around by changing my diet. By twenty I had a whole new lifestyle, a completely new life, and a much healthier body. There was just one problem. 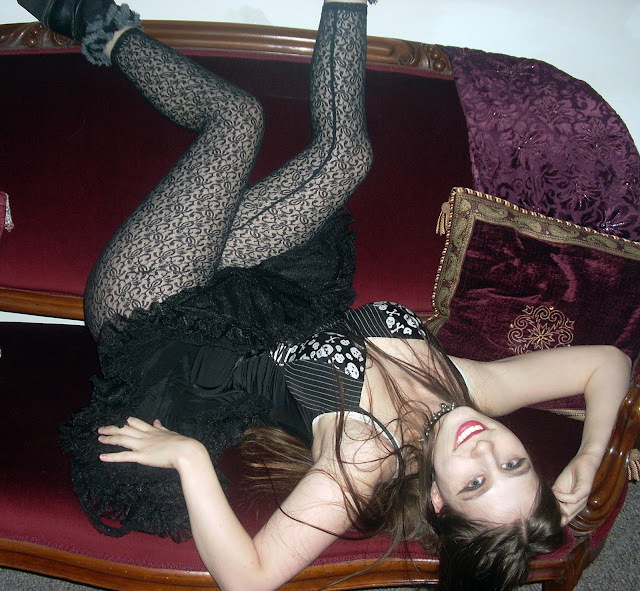 2009, Raederle at the age of 20
Over the course of my early twenties I became increasingly sensitive to chemical odors. In my late teens I had noticed that I got headaches from second-hand cigarette smoke, which seemed pretty common. By the age of twenty-four I was experiencing severe headaches from the fumes created by frying food (especially onions), which I'd never heard of before. This extreme fume sensitivity may have been brought on by the events in my teens working their way through my system, or they may be due to living in an attic for a couple years where all of the fumes from the house were collecting. It got so bad that I would go on road trips that lasted for months to get away. 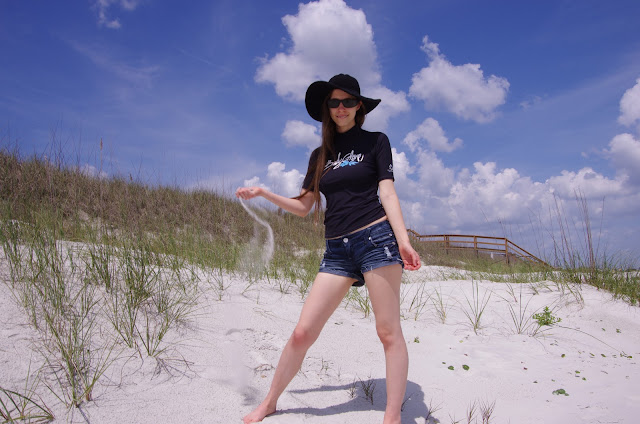 2012, Raederle, age 23, on a road trip, visiting Florida
A lot of good things have come out of my struggle with fume sensitivities. As my ability to go to festivals decreased, I spent more time with individuals one-on-one instead. As my ability to live in a city decreased, I spent more time in nature. As my ability to continue living in an attic decreased, I spent increasing amounts of time traveling which led to writing my book, Living Big & Traveling Far on $8,000 a Year (or Less!). As my own possibilities and abilities narrowed, I gained more compassion for other people with sensitivities and disabilities.
One of the most challenging things I've encountered is laundry. I can't even walk into a laundromat. Dryer sheets and conventional laundry detergents have a profoundly horrible impact on me. A single good whiff can leave me with a migraine that lasts for hours followed by continued exhaustion for the rest of the day. Imagine taking a single breath and losing the entire day to being in bed afterward! Because of this I also can't share a washer or dryer with other people who use harsh chemicals on their clothing because the ambient odor in the area is unbearable for me, and worse, using the machine leaves the odor on my own clothing, rendering it unwearable. 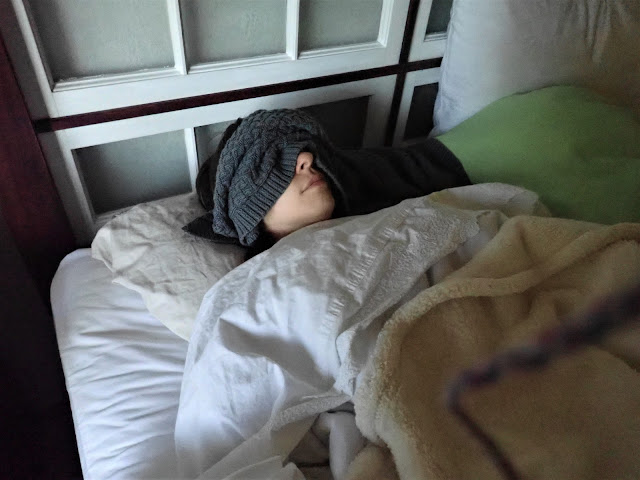 2018, Raederle, age 29, laying down with my eyes covered after being exposed to a chemical fume
For years I had no idea how to address this issue. I wore one of my n-99 masks to shop in a local thrift store in the summer of 2019. I thought the smell was just in the building, but it was actually in the clothes themselves – all of them. I tried soaking the clothes for weeks, changing the water regularly (always while wearing my mask). I tried washing them over and over again. I finally just shoved them all in a storage container, defeated. I couldn't wear them without a headache. 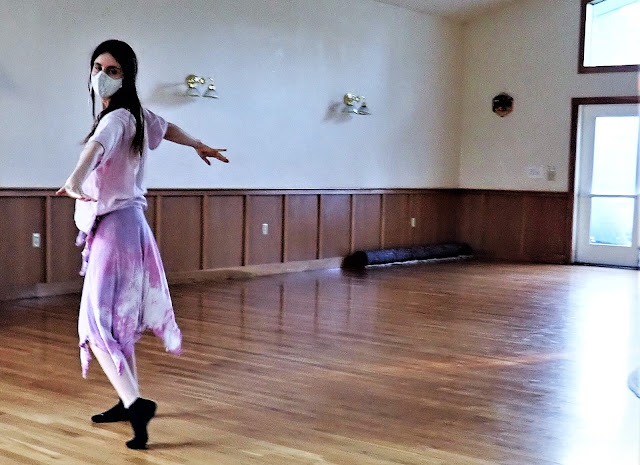 2018, Raederle, age 29, wearing my n-99 masks anywhere I encountered fumes – long before everyone was wearing them for COVID-19 in 2020 – above is an organic cotton "I Can Breathe" mask 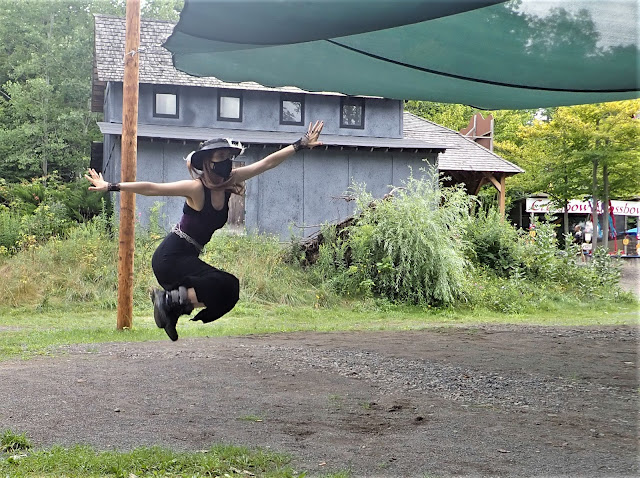 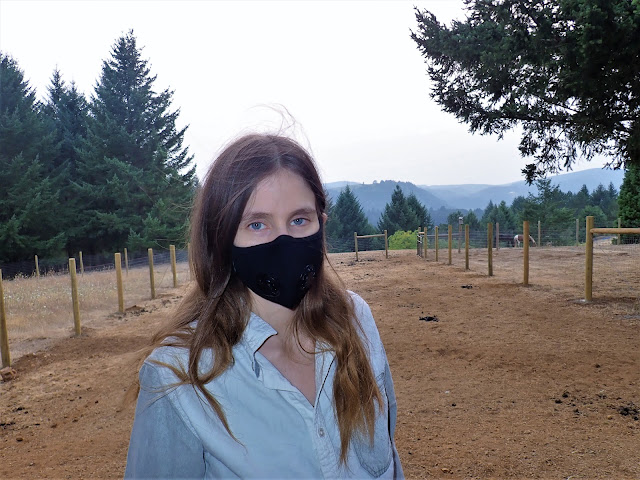 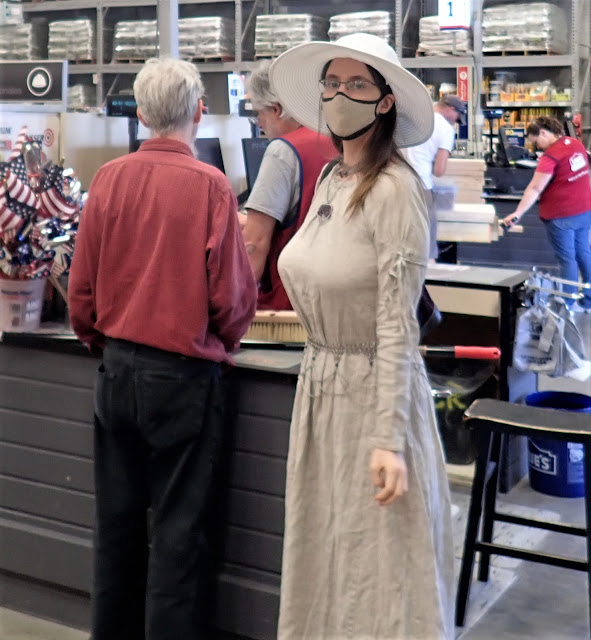 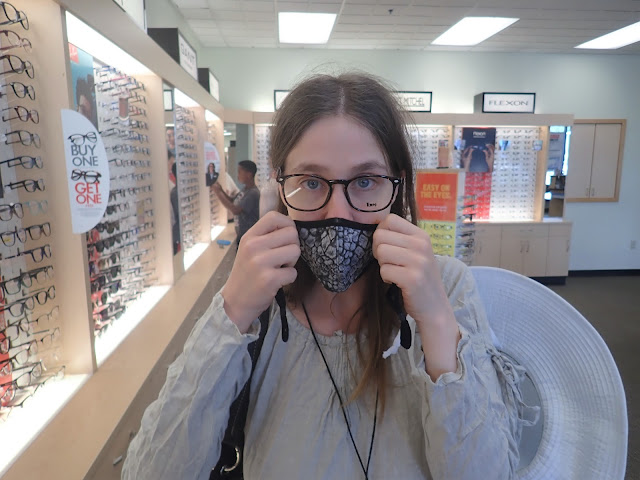 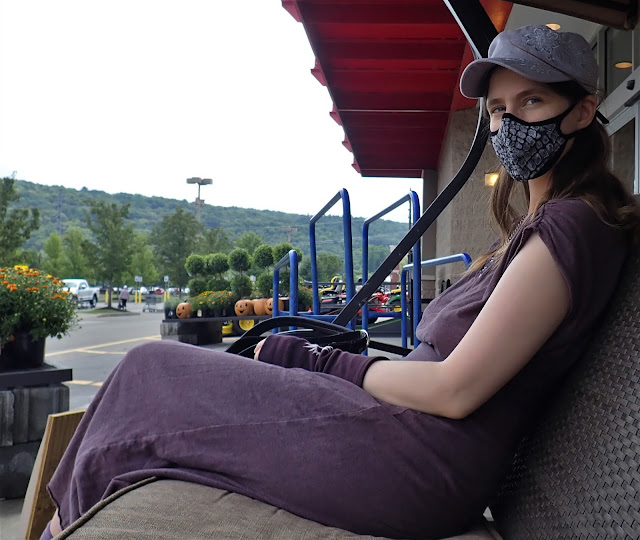 In April 2020 something awful happened which ultimately led to my writing this article. Most of my clothing was washed and then dried at a laundromat. It would have cost me thousands of dollars to replace it all (and much of it was hand-made by me personally, and not replaceable – including my denim trench coat), so I suddenly had a huge incentive to learn how to get my clothes clean. This was a grueling process, as every attempt required smelling my clothes to see if it had worked. Every time it hadn't I lost hours to pained bed-rest. After a month of trials and many errors, finally, my family figured out the steps required to extract chemical fragrance from fabric.
There are three keys to removing chemical odors from your clothing.
The more water you use per article of clothing, the better. Doing extra rinses may decrease the odor by about 10% and plateau there. Washing an article of clothing by itself can remove between 35% and 80% of the odor strength. However, you will never quite get it out with water alone, so you need to combine this with both the other mechanisms listed below.
We've rotated between a number of unscented, gentle, natural, organic clothing detergents. We thought they were all pretty much the same after experimenting with them over the years, so we just opted for the cheapest one that I wasn't sensitive to. It was a lucky chance that we discovered that Seventh Generation's Laundry Detergent was a magic bullet for removal of chemical odors. If you use a lot of it (double or triple your usual amount) in a regular-sized load, you might get as much as 90% of the odor removed, depending on how thick the fabrics are. Thicker fabrics (jeans, blankets, sweaters) will be more stubborn. If you wash an article of clothing alone, such as a fluffy sweater, you might get it entirely clean in one washing.
Most of my clothing is knit, so the best practice has always been to use cool water. Spandex, elastic, and knits all wear out much, much faster when you use warm water. Also, baking soda is very hard on elastic, so I recommend only using that on your non-stretchy fabrics such as your top sheets and towels (but not your fitted sheets, because those have elastic). That said, if you're dealing with a chemical odor and need to get it out, washing with warm water makes a huge difference. I suspect this is because it actually off-gasses a lot faster due to the heat itself.
My experience has been that it is rare to get an article of clothing entirely free from chemical odor on the first try, but if you want to give it the best chance, then do this: 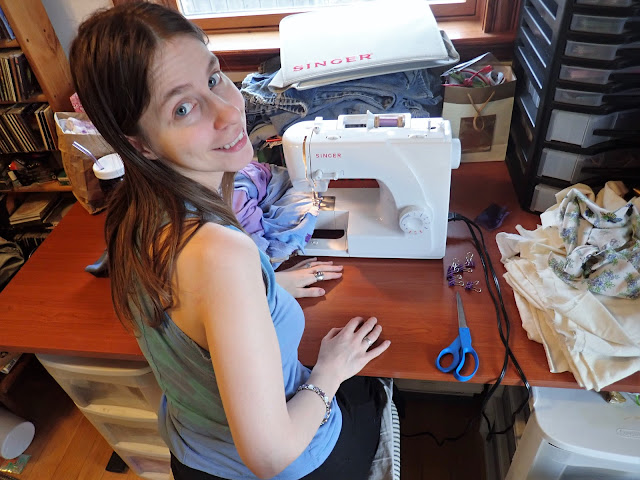 2019, Raederle Sewing Her Hand-Dyed Skirt Together
My experience has been that baking soda doesn't do it, letting clothing soak in a bucket for twenty-four hours prior to washing doesn't do it, and simply washing seven or eight times doesn't do it. So I've written this article specifically to save you from the frustrating experience I've had. I hope this helps.
Blessings!
~ Raederle Phoenix