Slimcado Avocado: The Good & The Bad

How Does A Haas Avocado Compare To A Slimcado?

We all love Haas avocados.
Guacamole is incredibly awesome. So awesome that someone created a twitter account just raving about guacamole, and trend called #holyguacamole.
So when I saw Slimcados at Wegmans my first reaction was "Oh! A different sort of avocado! Let's get two."
The sticker explains that Slimcados have less fat than your regular California avocado. I didn't purchase them for that reason but found it interesting to note.
The concept of a "new kind of avocado" reminded me of "sweet avocados" which I only ever had while I was living in California. The "sweet avocados" had a smooth skin like these over-sized Slimcados, but the sweet ones were regular Haas-sized. The sweet avocados tasted different, but I prefer traditional Haas avocados to the sweet ones.
How do Slimcados match up? 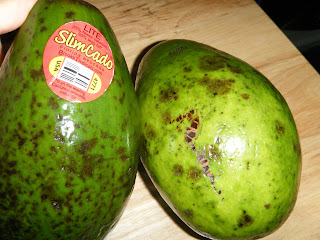 I wanted to make sure I got a good one, so I picked two that appeared very different in appearance.
The dark green one was by far the darkest Slimcado in the entire display. I'm guessing that it may have actually been picked riper, which would imply a better flavor. Since there was also a chance that the dark green one would simply be spoiled, I chose the other one for being fairly light colored in comparison with the others.
I wasn't sure how to tell when a Slimcado was ripe, so I did a quick google search after I got back home to determine when I should eat them.
The internet wasn't very helpful. I found this blog entry where the person obviously opened theirs too soon. I found another blog entry which described the Slimcados as simply "gross." The author writes in conclusion, "The slimcado does not taste good, plain and simple."
After reading those two bad reviews I had to ask myself, "Was it wise to buy two of this unknown low-fat fatty fruit?"
I did some more online digging, trying to find an answer to the question, "Are my Slimcados ripe, or not?" and found some other non-useful pages such as this one, which tells me essentially that most people have not tried them, a rare person on occasion loves them, but most people who try them find them bland.
I crossed my fingers and hoped I would be one of the people who loved them, especially because they're around twice the size of a Haas avocado for the same price.
I finally found a useful review of the Slimcado here: "I won't say watery like some did, it's not, but it's a much thinner consistency. The guac tasted good, but I give more credit to DH's guac skills than it's constituent avocado. I would recommend avoiding the slimcado if you find yourself at the grocery store. The Haas avocado is full of good fats and omega 3 fatty acids and tastes a hell of a lot...more."
In another description someone called the slimcado "nuttier" than a Haas.

No concrete ripe-ness information seems to be available, so I just "played" it like a regular avocado, waiting for them to be soft, but not so soft that they were squishy.
It turns out that in terms of the way they feel when you squeeze them, you do want them to be just the same as you'd like your commonplace Haas avocado.
Here's what my first one looked like when I opened it:

The skin is much thinner than a Haas, similar to the skin on a sweet avocado. I suspect this large breed of avocado (the "Slimcado") is really a sweet avocado with some water weight.

I'm very suspicious when it comes to trying new things, so I cut off each and every tiny little imperfection, resulting in the bowl full of Slimcado pieces pictured above.
I tasted it plain. Sure enough, watery. It's as though a Haas avocado was blended with water. In fact, that's almost exactly what it's like since a Slimcado has about the same calories as a Haas avocado, just simply less calories per volume since the Slimcado is so much larger. Go figure.
But... It isn't just watery. It's also a shade sweeter. It does have a somewhat different flavor that would not be present if you blended a Haas with water. "Does that slightly sweeter flavor imply it would be better for certain recipes?" I asked myself; The creative raw vegan chef inside me was alive and well.
But being typical me... Guacamole! I mean, seriously, I have all these tomatoes ripe on the vine growing in my yard, how could I do anything else?
And besides that I had made some carrot-patties. Warm in the dehydrator, thick, soft, mushy on the inside... Waiting to be topped with deliciousness and spinach.
So, I picked some lettuce, tomatoes, chives and other fresh herbs from the garden, pulled out the carrot patties and....
Ta da!

This dish turned out to be surprisingly hearty. My husband and I became stuffed before we could finish it.
(If anyone is wondering about my shirt, it was a gift from a friend of mine whom I play board games with. It says "Alien Robotic Factory" which only makes sense if you've played the board game "Race for the Galaxy." It's one of my favorite board games.)
I made up a bowl containing the leftover for my father:

Now be warned: The Slimcado is bland on its own. It's got a great texture for making a smooth creamy dressing or guacamole, but without heavy seasoning, your dish will be pretty flat. In the guacamole I put home grown tomatoes, chives, red onion, tomatillo, basil and possibly some other things, and I ate this with very flavorful crackers that contained two whole fresh cayenne peppers and the carrot pulp from a bunch of carrots that were juiced.
That said, the overall effect was still delicious. It certainly wasn't a waste.
The second Slimcado actually began to change color today. I didn't photograph it before I cut it open, but to describe it: The spots that before had been spots began to consume the entire color of the fruit. It had a few bad spots on the inside, but was mostly good.

On a side note, I decided to make raw vegan corn chips, and was delighted with my success. I used raw corn on the cob, ground flax and chia seeds and dehydrated for around 24 hours at 110 degrees. This is what the "batter" looked like:

Today, when I saw all the delicious ripe tomatoes on the vine outdoors, and crossed that in my mind with the darkening Slimcado and the fact that I had some cucumber, green pepper, fresh cayenne pepper, and basil all ready-to-go in the kitchen... Well, this happened: Overall, I say the Slimcado is basically an inflated slightly-sweeter avocado. It's probably best used in dips and dressings. Although it may be good in desserts as well. I don't recommend eating it plain, as it'll likely bore you to snoring.
From a nutritional standpoint, the Slimcado has four times as much phosphorus as calcium. That's a Calcium to Phosphorous Ratio of 1:4, which is really bad. You wouldn't want you main source of calories to come from avocados in general for this reason. It also has much more omega-6 than omega-3, making it a non-ideal omega-3 source. That applies to both the Haas avocado, and the Florida Slimcado, but the Florida Slimcado actually has an even more disproportion of omega-3 to omega-6. That isn't to say that avocados are bad for you. It just means that you need lots of foods that do have good ratios of calcium to phosphorus and omega-3 to omega-6. You can learn more about that by clicking here.
The lovely Ela remarks that there are "legions of varieties of avocado" and that some are watery and some are "so fatty they're almost rubbery!" She remarks that in Hawaii there are many, many kinds of avocados to compare and contrast. That is definitely a good reason to visit Hawaii in my book!
In May 2013 I actually did travel to Kaua'i island, one of the Hawaiian islands, although not specifically for the slimcados. That said, there is a plethora of wonderful tropical fruits on the island, and I've had many learning experiences with them.
Thanks for reading. If you have thoughts to share with me, sign up for my newsletter and/or e-course and reply any message you receive from me.
~ Raederle
Click here to return to the top.